wall stree journal opisao je holdengrabera  “only one man in new york who possesses the complement of skills—charm, erudition, curiosity and perhaps most of all chutzpah”

holdengräber: one tries to make the subject forget and yet remain on guard. It’s a mixture of both, trying to nurture what socrates said, ‘to give birth to a thought and make people feel at ease; and yet make them anticipate the next question.’

one must keep the urgency alive.  i speak of the euphoria of ignorance, the notion of approaching things through non-knowledge of the subject and the skepticism of knowing too much. in some way one must carry the desire for openness and not be afraid of where it might lead you.

when i was 18 and went off to the university, my father said, „don’t ever forget that the word university comes from the word universe.  the less interests you have, the less interesting you are. if you study law, you should also study philosophy. and don’t forget that across the street is a medical school. and in the medical school is an anatomy class. and you should go and learn about the human body.“

WRR: in many ways, you’ve created a sanctuary for interdisciplinary conversation and collaboration.

holdengräber: for me, the program is reflective of certain moments in high culture in vienna where people had serious discourse in the coffee houses and their ideas fed off one another. there was a culture of curiosity and I feel my role here at the new york public library is to be the curator of public curiosity.

WRR: that can pose a curatorial challenge.

holdengräber:  yes. my challenge is that everything interests me, such as the example i shared earlier about exploring sports. i’m thinking, why not?  when i was in los angeles, i read about the basketball coach phil jackson, who had his players meditate and read books on zen and plato. why not create a series with great sports figures?

but, i like to play with various genres and pair people together who will enhance one another’s work or bring out some aspect of the other. for instance, i worked with william claxton, the photographer who created the iconic images of chet baker. claxton said that photography is „jazz for the eyes.“ so i said, let’s recreate that jazz. so we brought claxton together with the drummer billy higgins and his musicians. while higgins and his band played, claxton took photos that immediately appeared on the screen.

for me the thought process that goes into bringing people together is an art form in itself.

to use the language of psychologist adam phillips, “we can’t tickle ourselves.  we need the gaze of the other. we need to be together.”

parlá describes the mural as a “written painting for and about the nature of language.” he goes on to say:

“although illegible at first sight, the juxtaposed characters, gestures, hieroglyphs, and words become readable through feeling, as it is my hope that the work evokes the language of your own inner voice — of your own history. in an era where technology is taking over as the driving force of communication, art reminds us of our roots and our need for face-to-face communication. this nature is our mirror, as art allows this bridge to be possible through the language of calligraphy, i pay homage to this nature; to our selves, and the history of languages, which are the mirrors of our present condition.”

parla: “this is a written painting for and about the nature of language, an abstract landscape of words, phrases, names, and poetic thoughts inspired by drifting through raleigh while on walks and visiting unexpected places through a playful survey that eyed various historical resources on a psycho-geographical exploration of the city. the painting is a reflection of my awareness – a diary of these experiential observations that form the syntax of its visual vocabulary.” 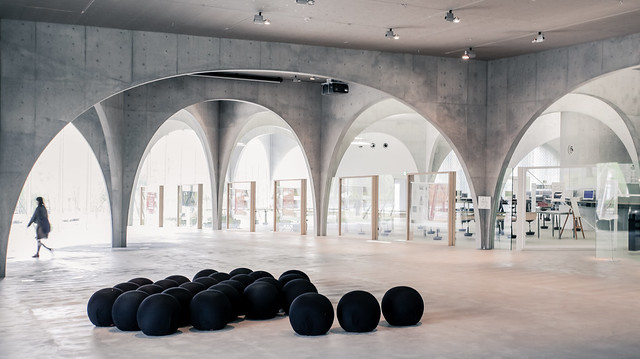 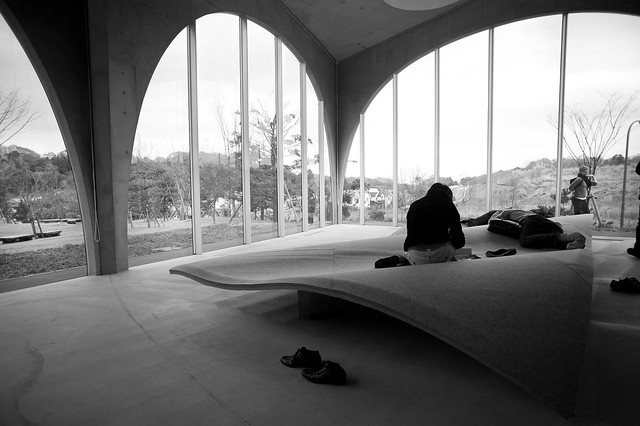 architecture in electronic age is figuration of vortex of information from the primitive age.
the human body has been linked with nature as a member in which water and air circulate.
people today are equipped with an electronic body in which information circulates, and are thus linked to the world through network
of information by means of this other body.
this virtual body of electron flow is drastically changing the mode of communication in family and community,
while the primitive body in which water and air flow still craves for beautiful light and wind.

the biggest challenge for us is how we can integrate these two types of body.
the same applies just as well to architecture today.
our architecture has traditionally been linked with nature through figuration of movements of vortices occurring in water and air.
with contemporary architecture, we must link ourselves with the electronic environment through figuration of information vortices.
the question is how we can integrate the primitive space linked with nature and the virtual space which is linked with the world
through electron network. Space which integrates these two types of body will probably be envisaged as an electronic biomorphic one.
for, just as the figure of a living body represents the loci of movements of air and water, the virtual space will most likely be figured
as the loci of human activities in the electron flow.

you envision architecture as media-clothing.

I compared man to ‘tarzan’.

tarzan in the jungle creates his body and develops it in contact with nature, in relation to the surrounding environment.
modern man is a sort of tarzan who lives in the world of media, within a very developed technology.
architecture should be a sort of media-clothing, which is necessary in order for man to have a relationship with and integrate himself into the environment.
the idea of media-clothing is a metaphor. (laughs)

people clad in such media suit are the tarzans in the media forest .